Several years ago the National Safety Council (nsc.org) published a report comparing reported injury rates of various activities in blocks of 100,000 participants. Based on their numbers, hunters experienced less than eight incidents via firearm-related injury per block, much safer than the injury rates of ping-pong (15), golf (104), tennis (119), bicycle riding (904), soccer (910) or baseball (2089). Any form of organized shooting range activity, such as a match, is even safer than hunting.

Data compiled recently by The Centers for Disease Control and Prevention have independently confirmed these numbers. From their web site (cdc.gov/injury/wisqars) the CDC’s WISQARS (Web-based Injury Statistics Query and Reporting System) is an interactive, online database that provides fatal and nonfatal injury, violent death, and cost of injury data from a variety of trusted sources. Researchers, the media, public health professionals, and the public can use WISQARS data to learn more about the public health and economic burden associated with unintentional and violence-related injury in the United States.

“Many people have the misconception that hunting is unsafe, but the data tells a different story,” said Jim Curcuruto, NSSF’s director of industry research and analysis. “Comprehensive hunter education classes that emphasize the basic rules of firearm safety and a culture of hunters helping fellow hunters practice safe firearms handling in the field are responsible for this good record.”

To put hunting’s safety standing into perspective, compared to hunting a person is:

16.3 million hunters took the field last year and approximately 8,122 of them sustained injuries of any kind (50 per 100,000 participants.) The vast majority of hunting injuries – more than 6,600 – were tree stand-related. 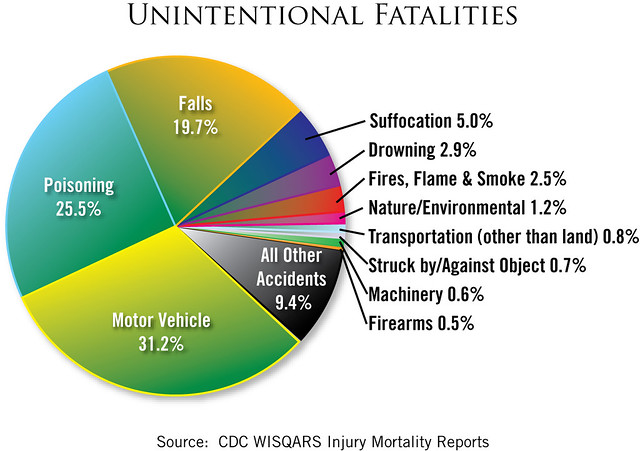 It’s not just in the hunting fields that firearms are being used safely either. The CDC also reports that firearms constitute just 1/2 of 1 percent of all unintentional fatalities in the United States, including those in the home.

View this document on Scribd

Read more in our March 2012 issue. Back issues are available.

Please check your email to confirm your newsletter subscription.